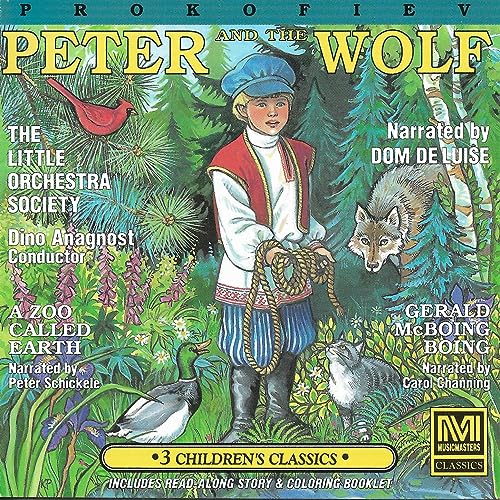 Peter and the Wolf and Other Children's Classics

In an ideal world, the liner notes for an album of music addressed specifically to children would be written by the children themselves-the millions who have thrilled to Peter and the Wolf (which would make any eight-year-old's list of imperishable masterpieces); the many who recall the cartoon "Gerald McBoing Boing" as one of the cinematic highlights of their youth; a younger generation that has explored the secret corners of "A Zoo Called Earth."
But it remains the grown-up's duty to purchase the albums, to set the disc spinning in the machine and, perhaps, to provide a litcle introduction. And it is more than likely that we will sometimes be asked to listen along. The American composer and critic Virgil Thomson, in a response to a mother who had asked him about a selection of music for her child, replied candidly: "I think that in your place I should go to a gramophone shop and listen to some of the records that are supposed co be suitable for children and pick out chose that offend me the least. It is grown people, after all, who suffer the most from inferior art products of all kinds."

I doubt that listeners of any age will "suffer" from the music on this disc. On the contrary, here are three lively, engaging compositions that should intrigue parents as they delight children.

Let's begin with Peter and the Wolf, which is still, after more than half a century, unquestionably the most popular children's piece in the repertory. Sergey Prokofiev composed this "orchestral fairy tale" in 1936 and it receiyed its world premiere at a Moscow Philharmonic children's concert in May of that year. The Boston Symphony Orchestra played the first American performance at Symphony Hall on March 25, 1938. Since then, it has been presented all over the world and recorded by such diverse personalities as Eleanor Roosevelt, William F. Buckley, Jr., and David Bowie.

The score carries the following introduction: "Each character of this Tale is represented by a corresponding instrument in the orchestra: the bird by a flute, the duck by an oboe, the cat by a clarinet in a low register, the grandfather by a bassoon, the wolf by three horns, Peter by the strings, the shooting of the hunters by the ketcledrums and the bass drum. Before an orchestra performance it is desirable to show these instruments to the children and to play on them the corresponding musical theme. Thereby the children learn to distinguish the sonorities of the instruments during the performance of this Tale."

The late American composer Gail Kubik wrote symphonies, sonatas, a folk song suite for orchestra, and served his country valiantly by providing the musical scores for government films during World War II.And yet Kubik is remembered most vividly for "Gerald McBoing Boing" -the story of a young man with an incredible talent for imitation who becomes the world's greatest percussion player.

"Gerald McBoing Boing" began life as a short cartoon produced in 1950 by United Productions of America for Columbia Pictures. In 1951 it was awarded an Oscar as the best animated cartoon of the year from the Motion Picture Academy of Arts and Sciences. Shortly thereafter, Kubik prepared a version of the story for narrator and orchestra, including a virtuoso part for solo percussionist, who is required to play some 20 different instruments.

"Because Gerald's producers-as well as his composer-were insistent that the musical score should function as equal partner with animation and writing in the film's production, the usual cartoon-making procedures were reversed," Kubik wrote. "The score was composed first; the music served as a blueprint for animation and not, as is usual, as imitative "super sound effects" to accompany the animation. In short, music functioned as music. To transfer Gerald's score, therefore, from motion picture screen to concert stage was simple, indeed, and was accomplished without alteration or loss of a single note."

Peter Schickele, best known as the creator of P.D.Q. Bach (the "last and least of Bach's children") and one of the very few concert humorists who consistently manages to be both musical and funny, has provided succinct program notes for "A Zoo Called Earth."
"From the ages of eight to twelve, I lived very near the zoo in Washington, D.C.," he explained. "I hung out there a lot and was usually pretty much up on what new animals had arrived. Now, what if visitors from another galaxy-beings who lived for millions of earth-years-flew by our planet every once in a while (a long while by our standards) to see what was going on he,re? Each time they came by they would have seen some animals they had never seen before. This is the thought that led to 'A Zoo Called Earth."'

The piece was written for the St. Louis Symphony in 1970 and the first performance took place-appropriately-at a concert the orchestra played at the St. Louis Zoo. "During the sort of rock march for mammals, with which the piece ends, they had an elephant and other big animals parading in front of the orchestra," Schickele recalled.

"A Zoo Called Earth" is scored for paired flutes, oboes, clarinets, and bassoons; four horns, three trumpets and trombones, tuba, four percussion players, celeste, strings, and an "alien narrator," whose words are here intoned by none other than the good Professor Schickele himself.
--Tim Page