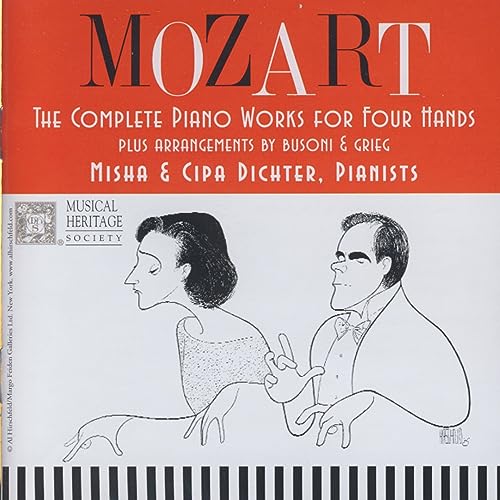 PLUS ARRANGEMENTS BY BUSONI & GRIEG

0ne of the few constants in Wolfgang Amadeus Mozart's all-too-short life-other than the amazing stream of great music that poured from his mind - was his ongoing contact, mostly through correspondence, with his older sister, Maria Anna. As children, whenever they were separated, usually so Wolfgang could go on tour with his father, the young genius would write long letters home. This continued even after brother and sister had grown up and chis strong bond between them was probably forged by the musical tandem they were. As early as 1761, when Wolfgang was five and Maria Anna, who he called Nannerl, was 10, the Mozart children were a musical duo, with Maria Anna playing the clavier and Wolfgang the violin. One can only imagine the quality of the music those two made as they were growing up. But Wolfgang also learned the clavier and was soon a greater keyboard artist than his older sister. She, however, by all reports was an extraordinary artist and could have been a star performer. There is no question that early on brother and sister were playing together at the keyboard. It is tempting to imag­ine what those sessions were like!
The first composition, written expressly for the duo-pianists, was composed while the family was on tour in London in 1765. While there, Wolfgang wrote the Sonata in C Major for Piano Fout Hands. That work, listed as K. l 9d, was the first in the series of
great works that grace these CDs. Though not all of these Sonatas were composed for his sister, they are all filled with his love of the form that he learned at such a young age.
One interesting aspect about their relationship that is clear from the letters between
them, was that Wolfgang relied on his sister's skill to 'test-drive' his compositions. In a letter written in Salzburg to her brother on tour in 1777, Nannerl wrote: "Thank you for sending the first movement and the Andante from your Sonata which I have read
through. The Andante requires great concentration and exactness in playing."

The wonder of the works on this recording is that they capture every part of Mozart's quirky, intriguing personality, as if he were telling the story of his life through these
pieces. This genre was one that Mozart continued to explore throughout his life, and
every piece in this amazing work captures a different mood, emotion or style.

The earliest piece, the Sonata in C, K.19d was written with the intent that Wolfgang and Nannerl would use it as a showpiece for their concerts. Of course, since it was
composed by a nine-year-old boy, the wonder of the Mozart children could only be
increased by such an astounding creation.
By the time Mozart had reached his twenties and was traveling all over Europe in
search of recognition and money, he found that the Sonatas for Piano Four Hands made wonderful teaching tools for his wealthy students. For example, the astounding and complex Sonata, K.448 was composed for Fraulein Josepha Auernhan1mer who went on to have a career as a concert pianist, and, using the name Frau Bessenig, continued to perform in public until 1813.
In 1787 Mozart dedicated the Sonata in C, K.521 co the sisters Babette and Marianne Natorp. In a letter about the work, Mozart wrote: "Please be so good as to give the sonata to your sister with my compliments and tell her to tackle it right away, for it is rather
difficult." How true!
While all of the works contained in this Complete Piano Works for Four Hands are typically melodic and fun in a Mozartean way, the lase work of chis type he composed is particularly interesting. The Fantasia in F Minor, K.608, written just one year before he died, was intended as a piece for mechanical organ. It was a commission from a clock-maker in Frankfurt Am Main. In a letter to his wife, who was in Vienna, he wrote: "I have now made up my mind to compose the Adagio for the clockmaker and be able to send you a few ducats. And this I have done, but as it is the type of composition which I detest, I have not been able to finish it. I compose a bit every day--but I have to stop because I get bored. And indeed I would give the whole thing up, if l didn't have such a good reason to continue. I still hope that I will be able to force myself to gradually finish it. If it were for a large instrument and the work would sound like an organ piece, then I might get some fun out of it. But, as it is, the work consists solely of little pipes, which sound too high-pitched and too childish for my taste."
How ironic that something could sound too childish for Mozart, but this was the adult Mozart, and we are indeed lucky that the work was completed and later adapted for four hand piano, and the result is really magnificent and is the perfect exclamation point on th is amazing journey through this music that was very special to Mozart.
As a special addition to this collection, the Dichters did a bit of digging and found two of Mozart's works that had received input-some might call it meddling-from later composers. Busoni was a skilled arranger-he may be best known for his demonic piano version of Bach's Chaconne--and, intrigued by Mozart's brilliant Fantasy, K.608-rhe one originally for Mechanical Clock-he rescored the piece for two pianos. The result is astounding and shows how Mozart's melodies can be adapted. But what may be the most unusual piece of all is the Sonata, K.545. This work was originally for one piano, but a century after Mozart composed it, Edvard Grieg decided to take this delicate piece and add a second piano part. Leaving the first piano exactly as Mozart had written it, Grieg added a second, ·independent part, played here by Misha Dichter. While this update is musically interesting, there are some pretty amusing moments.

But what remains at the center is Mozart's irrepressible genius and I am convinced
that, if you listen carefully to the fiendishly tricky passages and intricate interplay
between the parts, you can hear Mozart chuckling to himself. These are works of love,
and in these exceptional performances, the love, especially Mozart's love for the piano,
shines through.
-Anthony Rudel