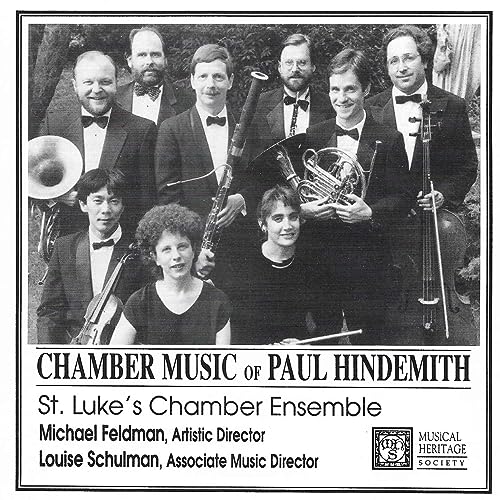 -Paul Hindemith was both poet and pedant-a difficult combination. As such, he has been hailed as the epitome of musical craftsmanship and dismissed as a learned automaton; seldom has he been understood.

Hindemith's character-meticulous, self-assured and determinedly anti­-Romantic (once, when asked where he found his inspiration, he held up his pencil)-has too often been used as a club with which to beat his music. His sheer professionalism makes us suspicious (Hindemith is said to have been able to play every instrumental part in his compositions, whether viola, tuba, oboe or percussion). We much prefer the image of composer as wild-eyed mercurial genius, listening to the voice of nature on long woodland walks. Hindemith-stern, professorial, physi­cally unprepossessing and more than a trifle stolid-just doesn't fit the mold.

Still, during Hindemith's lifetime, he was one of the most widely admired of contemporary composers. Several of his works-the "Mathis Der Maler" symphony, "The Four Temperaments" and, especially, the "Symphonic Metamorphosis on a Theme by Carl Maria Von Weber"­have earned a small but secure place in the standard repertory. But the vast majority of Hindemith's music remains unplayed, unheard. Which is a shame, as listeners to this recording of three late chamber works will quickly discover.

Throughout his career, Hindemith was regularly hailed as a "20th Century Bach." The reasons for theanalogy are obvious: polyphony was the essence of their art. Like Bach, Hindemith was most interested in counterpoint, from which he built grand, arching musical structures. Hindemith, no fool, encouraged the comparison by writing a massive key­board work called "Ludus Tonalis" which bears both spiritual and techni­cal similarities to "The Well Tempered Clavier" and the set of "Kammermusik" has been cited as Hindemith's answer to the "Brandenburg" concertos.

Yet, ultimately, Hindemith went his own way. "Our musician will decide not to enter serfdom in the form of obeying the performers' orders," he wrote in his book "A Composer's World." "Begging for their condescen­sion will be below his dignity; no blar­ing publicity for publicity's sake will be his ambition. The opinion of short­sighted critics, be it bad or flattering, will not touch him; publishers will have no chance of pushing him around. He will refuse to build his fame on a ground of musical chauvin­ism and he will not belong to cliques, the only purpose of which is mutual eatherbedding of their members. The ceaseless hunt for sinecures masked as scholarships, ever-renewed instruc­tion and plain payment for laziness will appear to him what it really is: an enervating excuse for a meager out­put."

"His choice is honest and hard work," Hindemith continued, "and with this he turns our negative pic­ture into its positive form, in which the arrangement of light and shadow is correct and artistically most satis­factory. If we then ask what the aus­pices of his work are, the answer will be: he has entered the inner circle of veritable artistic creation and, if his talent permits, he may well be on his way to producing a musical master­piece."

Paul Hindemith was born in Hanau, Germany on Nov. 16, 1895. As a boy he supported himself by playing the violin in cafes, cheaters and dance halls. After studies in Frankfurt, he helped organize the Donaueschingen Festival at Baden-Baden, an impor­tant forum for new music. By the late-20s, Hindemith was recognized as one of the leading composers in Germany. Upon the advent of Nazism, Hindemith left Germany and his music was banned from perfor­mance there. He initially went to Turkey, at the request of the govern­ment, to help reorganize musical edu­cation in that country. Then, in 1940, he came to the United States and joined the faculty of Yale University. There he continued co compose, while conducting the university's Schola Cantorum in important and scholarly performances of early music by Perotin, Monteverdi, Weelkes and Gabrieli, among others. He also wrote several influential textbooks; this writer vividly recalls struggling through "Elementary Training for Musicians" during his student years at the Mannes College of Music.

In 1953, Hindemith returned to Europe, where he settled in Zurich. During his last years, he paid several return visits to the United States, notably to attend a four-day Hindemith Festival presented in New York.He died on December 28, 1963, in Frankfurt, of acute pancreatitis. Professional reactions to Hindemith's music have always been mixed. Virgil Thomson's famous slam begs quotation: "[Hindemith's] music is not without a certain impressive­ness for the music public in general. It is obviously both competent and seri­ous. It is dogmatic and forceful and honest and completely without charm. It is as German as anything could be and farther removed from the Viennese spirit than any music could possibly be that wasn't the work of a German from the Lutheran North. It has no warmth, no psycho­logical understan,ling, no gentleness, no Gemuclichkeic and no sex appeal. It hasn't even the smooth surface ten­sion of systematic atonality. It is nei­ther humane nor stylish, though it does have a kind of style, a style rather like that of some ponderously monumental and not wholly incom­modious railway station."

Bue, for others, Hindemith remains • one of the century's distinct and orig­ina I masters. Let us give the late Glenn Gould, a discriminating but committed Hindemith admirer who made several fascinating recordings of midst chapters with benumbingly anticipatable plot-lines, paragraphs, even pages, in which musical characteri­zations are drawn not only sympatheti­cally and insightfully but with an ascetic commitment to detail that suggest the medieval mating of ritual and ecstasy."  --Tim Page